Frankie and Mike find themselves caught in the middle of a long standing family feud when Frankie's Uncle Dutch contacts her dad, Tag, in an attempt to reunite and bury the hatchet with his estranged brother. Meanwhile, a fearful Sue receives her first detention ever for being caught going off campus for lunch and seeks advice from Axl on how to survive the ordeal unscathed. 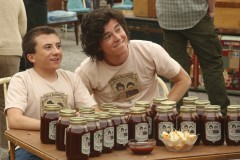