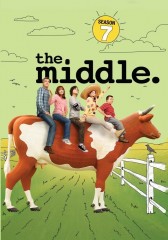 The Middle: Season 7 is available on DVD today from Amazon.com and the Warner Archive.

The three-disc manufactured-on-demand release includes all twenty-four episodes from The Middle's seventh season.

The Middle’s seventh season sees each member of the Heck family breaking out of their comfort zones. Oldest son Axl (Charlie McDermott) begins his junior year, and the business major starts thinking seriously about his future. Daughter Sue (Eden Sher) starts her first year of college at the same campus that Axl attends – much to his disgust – with a new haircut and an even more optimistic outlook. Quirky youngest son Brick (Atticus Shaffer) begins his final year of middle school, and his equally quirky girlfriend, Cindy (Casey Burke), wants to take their romance to the next level – holding hands! Finding themselves facing an emptier nest, Frankie (Patricia Heaton) wonders if her parental duties will ease up while Mike (Neil Flynn) finds himself in a bit of a midlife crisis – shocking everyone by deciding to take some new chances. Could this finally be the year of the Hecks?