Home > The Middle Episode Tournament: Round 2 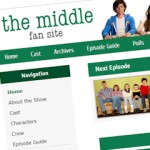 The first knock-out round of our The Middle episode tournament has now closed. The eight winning episodes have made it through to the second knock-out round.

In the previous round, The Graduate was the winner against The Scratch with 65% of the vote, Taking Back the House won decisively against The Jeans with 82% of votes, Wheel of Pain beat Royal Wedding with a 57% share, Last Whiff of Summer was the clear winner against Christmas with 72% of the vote, Life Skills defeated The Christmas Tree with 69% of votes, The Wonderful World of Hecks defeated The Graduation with 65% of votes, War of the Hecks won against hecks on a plane with a 60% share, and finally, Major Changes was the winner against Orlando in the tighest race of the round with 55% of votes.

The winning episodes now go head to head in the following four pairs: The Graduate vs. Life Skills, Taking Back the Hosue vs. The Wonderful World of Hecks, Wheel of Pain vs. War of the Hecks, Last Whiff of Summer vs. Major Changes. Voting is open until Wednesday, August 12.