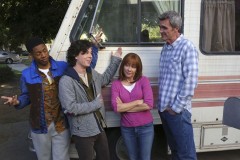 After Brick attends a Bar Mitzvah and questions when he'll officially become a man, Mike attempts to help him become more responsible in his quest to manhood. Meanwhile, Sue exudes a little too much enthusiasm as she tries to flirt and find herself a boyfriend, and Axl and Hutch find themselves a new home in the form of a Winnebago.